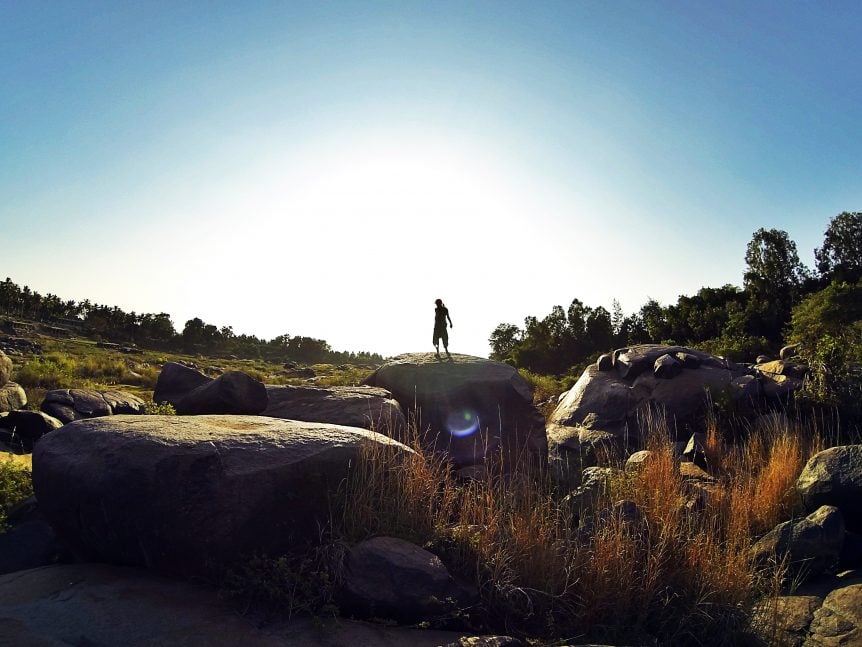 I was sitting in traffic, in Stockholm, and I knew there was some trouble on the bridge. I knew it would take me like at least an hour to drive 4 kilometres. So I was, you know, pissed off, honking the horn. I thought, why am I not laying down on a beach somewhere. Instead of all this shit. I got a happy feeling, it followed me all the way home.. So I booked a ticket, for a few months later.. Told my boss the next day I’m quitting. Told my mom and dad I’m leaving. Waited two or three months and left.
So I left on February last year.. It snowed, it was a bit of a snow storm the day I left. It felt very good leaving.

I flew to Bangkok. Stayed there about a week. Partied in Bangkok, big city you know. Got pretty tired of that. And it’s not that cheap in Bangkok, I mean if you’re going to clubs and spending money. So after a week I had spent a months worth of money. I thought, “Shit. Fuck this, I need to go lay down on the beach and chill out for a while.”

So I went to one that was kinda close, Pattaya. Horrible fucking place, I didn’t do any check up. But that’s like the prostitution capital of Asia. I didn’t have a very good time there..
I found a Finnish bar though, that showed the Russian hockey league. So at least I could stay there and watch the games.. but, uhh.. It was bad.. so I only stayed a few days.

Then I went to the north, up to Chiang Mai. Fell in love with the city at once. Chiang Mai is like beautiful.. Big city, but feels kinda small and.. I mean it’s in the highlands, but it’s not rural. It’s not hectic like Bangkok, it’s got a laid back atmosphere. A lot of art in the city, very cultured city. I liked it a lot there, stayed a long time. I stayed there for a about a month. Then I went to the south, to see a few islands.

After two months in Thailand I flew to Vietnam. And did sort of a south to north travel. Vietnam was great, food was great, people were great. I would like to go back to.. it’s like the place I’d like to go back to the most. I don’t know.. they’re friendlier than Thai people… Thai people have this thing about friendliness you know, they have to be overly friendly. I find the Vietnamese are actually friendly. I went first to Ho Chi Minh City, stayed there for about a week, uh… With a Swedish dude that just, rented bikes in the north and had driven south through the country. And I.. I met them on their last week and after they flew out I went north.
Stayed in a few places on the way. Hoi An was beautiful.. beautiful. Umm.. Dalat was great. Uhh.. From Hoi An I went to Hanoi, stayed there for a while. Then to Cao Bang, it’s like way up in the north, very beautiful valleys, some kind of national park. Great for trekking. There’s like, I guess some kind of tribal people, Black Hmong live there. So it’s like at a homestay.. pretty fucking cool.

Then I took a bus into Laos, fucking 27 hour bus ride. Horrible… It was pretty shit, that bus ride, but yeah they’re building a new road up there. It will be really good in a few years, but right now it’s a nightmare.
And Laos, I don’t know.. There’s not that much in Laos, to tell you the truth. It’s.. It’s got a small population.. There’s a lot of wilderness. I met a girl.. and stayed in the capital with her, for like.. about 2 months. Then she went to Africa to see her mother, so I went back to Thailand. I was gonna meet up with my nephew, but he was in the south, in the islands. He was at a full moon party and I didn’t want to go, so.. I went back up to Chiang Mai and stayed there instead. Uhh.. Well since I could stay with bhang for free so it was a good idea.

And then I met my nephew and his friends in Bangkok for two days of drinking and then we went to Cambodia. Siem Reap, you know Angkor Wat, the temples. And there’s a pretty good pub life. I mean there’s a lot of bars for such a tiny, tiny place… Yeah, it’s got a pretty good pub street for being such a small place. Uhh..

Then I went to Phnom Penh, the capital… It was kinda.. kinda a shitty country, in some ways.. and nice in some ways. There’s a lot of like overgrown.. overgrown.. British old shit. No, French old shit.. I guess.. or British.. I don’t know.. It was raining the entire time. Cambodia was kind of a dump. I didn’t like it. I had a months visa, but I left a little bit earlier.

Went back into Laos, cause Olga was coming home from Africa, so I went there to see her again. Uhmm.. Stayed with her for like another month.. Then I went back to the north of Thailand, to Chiang Mai again and… Oh I went up to Pai a few times as well. It’s close to Chiang Mai.

Then I went to Myanmar. Myanmar was interesting. Just around the election time, so.. a little bit tense. Well yeah, people were very hopeful. Hopeful for the future. We’ll see how that works out.. Then I was back in Thailand. Again Chiang Mai.. Always Chiang Mai, I keep returning there, I love that place.

And then I went to Bangladesh.. Umm.. Bangladesh is not that easy to travel. They don’t have that much tourism. Finding like a hotel that isn’t only for western businessmen that is like 50-100 dollars. Finding anything cheap is hard, because the cheap places they usually don’t have a license to have foreigners living there. But yeah, I managed to find a place anyway. Stayed there about a week.. and then I moved in with this family. Me and another guy, we sort of rented a room in their house.. well, in their flat. Stayed there for the rest of the month. This was in Dhaka, in the Wari neighbourhood. We stayed most of the time in Wari… First I stayed in Sakura bazaar, it’s like the main hindu area. There was like a festival, something about Kali. Supposedly Kali is important in Bangladesh, and in West Bengal in India.. for some reason.

December 2015
Uhh and yeah then I was in India.. So I came to Kolkata, because from Bangladesh it was close. And then.. uhh… Varanasi, Agra and then into Rajasthan. Came to Pushkar and stayed like two weeks in Pushkar and then..
I went to Nepal for New Year and Christmas. Mainly because my visa was running out.. Oh yeah, because in Bangladesh the Indian embassy was closed and it was… there was a whole thing going on about.. they were executing some politicians, it was… a whole thing about it. There were some kidnappings, and some riots.. and shit.

Christmas and New Year in Nepal was good. It was very low key, there’s not a lot of people there, in winter. But yeah I had a good enough time. I just wanted to lay back, but it was fucking cold. You know, fuel shortage.. So I mean it’s cold anyway, but with the fuel shortage they don’t keep any heaters on. And you know when it’s only like 15 degrees outside, you don’t feel like taking cold showers all day. It’s a bit tough like that, but otherwise it was good.

And I guess since then I’ve been in India. So it was.. Delhi, stayed two days. Took a 24 hour train ride to Mumbai, stayed there for two days, then… then Goa, stayed what.. two weeks. From there to Gokarna, two weeks and now I’m here. And yeah.. I love the trains in India, it’s the best way to travel in India. They cost nothing, man. They’re like really cheap. Like a 24 hour train ride and it was what.. 7— or 800 rupees.. you can’t beat it..… yeah… I like India. That’s why I came back, I knew I wanted to come back to India..

Last time I was in the south though, mostly in Kerala. But yeah I had a good time last time, so definitely I wanted to come back.. and now I’m basically waiting out winter and then it’s fucking back to Europe.. I haven’t booked any flights yet, but my visa here runs out in end of March. So.. I guess I’ll have to leave by then. Go see my sister in England, for a week or two maybe and then.. fucking trying to find a job and shit like that.. somewhere to live. I haven’t sorted any of that out yet. But.. I don’t know.. Don’t know what to do…
Sweden… you know the grind there. You get up at 5, cause you start work at 6 or 7.. Get up at 5, drink your coffee. Go to work, drink you coffee. Work until lunch, drink your coffee. Work until afternoon, drink your coffee. Work until 4, go home, drink coffee. Cook food. Chai, chillum, chapati, go to sleep. Uhh.. then it’s the next day and you… same same.
Comparing Sweden to Asia… it’s hard to compare. The standards are very different.. I mean like Thailand has pretty high standards, but that’s like.. so very different anyway. The cultural thing. They value some things, like we don’t and the other way around as well, I suppose.

Meaning of happiness, man.. you’re going too deep with this, haha… Momentarily forgetting about life’s worries, I guess…. Happiness is only momentary.. not a lasting emotion. Guess emotions aren’t.

Nah, I’m not an overly passionate as a person. I’m not that good at traveling, I tend to stick to places. Travel’s fun though, but I don’t know… yeah, it’s alright.